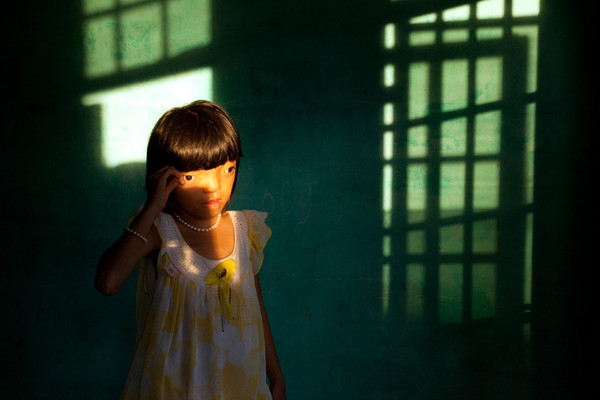 Vietnam: The legacy of war
The Vietnam War ended in 1975. The USA withdrew their troops and North and South Vietnam were reunited. After 35 years, the world no longer pays attention to the drama. But for the Vietnamese people the legacy of American warfare continues. It was a cruel and brutal war that was also extremely damaging to the environment. US forces used the herbicide Agent Orange to destroy foliage that the North Vietnamese were using as cover. Agent Orange contains dioxins that are known to cause cancer and damage genes. The effects of the toxic substance can be seen among Vietnamese people to this day: cancer, immune disorders and severe deformities. According to official estimates, there are 1.2 million disabled children in Vietnam. In rural areas, the percentage of disabled children is significantly higher than in urban areas. The face of 9-year-old Nguyen Thi Ly is a sad example of this toxic legacy.

Nguyen Thi Ly and all the other affected children photographed by Ed Kashi live in Da Nang.. He particularly cares for the little ‘war veterans’. Da Nang was an American base of operations where tons of Agent Orange were stored for defoliation missions. 56,000 of the city’s 800,000 inhabitants suffer from disabilities caused by this chemical warfare. Today, scientific research on the ecological, social and health effects of Agent Orange is being carried out in Da Nang, funded by the US government and aid organizations.

In his photo series, American photographer Ed Kashi shows the everyday life of two families who receive help from the organization “Children of Vietnam”. “I deeply believe in the power of still images to change people’s minds”, Kashi describes his work. Kashi especially cares for the little ‘war veterans’. With his photos, he wants to show that war causes endless suffering – not just for one generation.