Posted on April 24, 2012 by Veterans Speakers Alliance, Veterans For Peace 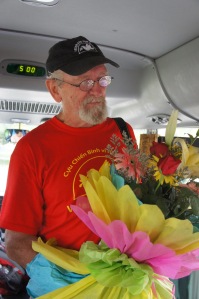 April 20, Friday: We flew from Hanoi late morning and arrived at Chu Lai (former US base converted into the Hue airport) under a blazing hot sun, drove to our hotel inside the walls of Hue, and moved into a splendid little motel just across the street from the walls of the Forbidden City.  We were met there by Don Blackburn, another member of the VFP Chapter 160 who lives in Nha Trang and teaches at the school that Michael Cull runs there. Don used to live in this same hotel when he lived in Hue, and Suel Jones and Chuck Palazzo were also well known by several of the staff, who were very happy to see old friends.

In the afternoon, we had a formal meeting with Ms. Chung Thi Mai the vice chair of the local Vietnam Union of Friendship Organizations (VUFO) for Thua Thien-Hue Province, and her staff person, Vo Dinh Anh Tuan, the deputy chief of office. They related that VUFO Hue Province has formal association with Thailand, US, UK, Laos, China, France, Russia, Japan and overseas Vietnamese; and that portions of the province, especially A Luoi valley is affected by Agent Orange.

We had the rest of the day off, until yet another feast for dinner in a fine restaurant down a tiny little alley within walking distance of the hotel.