Posted on May 2, 2012 by Veterans Speakers Alliance, Veterans For Peace 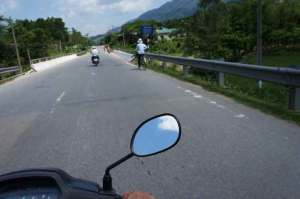 April 24, Tuesday: Off we went down Highway 9 through cobwebs of the mind looking for familiar landmarks, but everything thank god has changed. Even the best known and easiest-to-recognize pile of rocks, the Rockpile, doesn’t look the same. Back in 69 it was barren, presumably from herbicide sprays to make sure there was no cover for sappers brave enough to try to attack the tiny Marine communications outpost on the tippytop.

Now it is covered in greenery of all colors, and the road has been moved a half mile south, so our view of the outcrop is from a new angle. It also seems bigger — clearly the result my weaker legs making it even more unscalable than it was when I was 20. But when I checked an old map file on my computer, I confirmed that rock pile was the Rockpile alright. In the photo the Rockpile is on the left and Razorback runs towards the right. And so it went all day, through Cam Lo, past the Razorback, under the shadow of Tiger’s Tooth, and right down the middle of LZ Stud — I didn’t recognize much — the only thing that was really clear was the left turn of Highway 9 towards the south near the Rockpile. After Stud we were in new territory for me, so I just took in the sights as 9 headed west to Khe Sanh and beyond into Laos.

As we passed Cam Lo Ville (now City), I related the story of how I inadvertently burned down an Army armored personnel carrier (APC) one night when I shot a white-phosphorus (WP) pop flair too low. WP burns at 5,000 F and is not to be messed with. A pop flair (see photo) launches a bit of WP into the air and slows its descent with a small nylon chute. The bright light from the burning WP is supposed to provide only about 45 seconds worth of illumination. However, I fired the flair on too low a trajectory, and the chute opened directly above an APC, dropped into the open hatch, and landed on the APC’s floor carpeted with not one but two layers of ammo cans. In the glow of the flair down the hatch, we could see everyone bailing out of the APC. Then the ammo started to cook off and the whole thing burned all night. Thus, we got illumination for a lot longer than the normal 45 seconds, but since it was at ground level, it was not very effective. The Army cap’n came around the next day asking who had sent up that flair, but no one ratted me out, and I certainly did not want the cost of an APC taken out of my check.

Khe Sanh was hot and boring. After lunch in Khe Sanh village, we picked up the Ho Chi Minh Highway, a pale shadow of one of the greatest military engineering feats of all time — the Ho Chi Minh Trail — and headed south to A Luoi (we called it the Ashau) Valley. The North Vietnamese Army moved untold tonnage of material and manpower down the trail system over a 16-year period, under constant rain of defoliants and hail of bombs delivered by the wealthiest and most industrialized country in the world and in history. Still, the new highway reflects a new and peaceful era, and is a decent two-lane ribbon.  When it is finished, which will be soon, it will be the only road other than the coast highway that runs the length of the country. While the Ho Chi Minh Trail was largely in Cambodia and southern Laos, the new highway carefully stays inside Vietnam’s borders, even when it is not a convenient route. The road stitches the highlands to the rest of the economic and political structure of Vietnam, and it is a hedge against loss of portions of the coastal highway when global warming floods the lowlands. 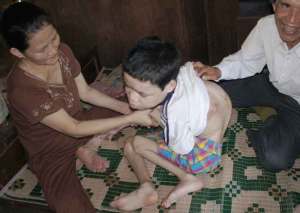 There we visited three families with children afflicted with Agent Orange. The photo shows one, Pham Quoc Huy, 22, whose mental retardation severe spina bifida, other deformities, chloracne, and frequent seizures render him unable to communicate, walk, care for himself in even basic ways, or even sit up. Both the father and the mother were exposed. The family has five children, two are “OK” but frail, one died from brain cancer, and two are clearly affected  by AO, Pham and his 29-year-old sister, Pham Thi Thuy. The other two families are in similar straits with young adult children with birth defects, mental retardation, and a host of other health problems — a situation that drives families into dire poverty. It was a rough day emotionally, but a powerful motivator. We must find ways to help these families. We cannot undo the done, but we should be able to provide the victims with much better care.