Posted on May 3, 2012 by Veterans Speakers Alliance, Veterans For Peace

A Luoi Valley: A So is a know Agent Orange hotspot

April 25, Wednesday: A Luoi. This valley was a major battleground throughout much of the American War. Battles named Ashua Valley, Hill 888, and perhaps others I forget were fought there. The valley angles from northwest to southeast and was a natural route from the Ho Chi Minh Trail into South Vietnam aimed at Da Nang. It was sprayed heavily with defoliants throughout the war, and was bombed mercilessly. There were three Special Forces bases, A So (hence Ashua) was in the southern portion, and two others were located further north in the valley. The western side of the valley has high, forbidding mountains, either in or on the border with Laos.

The only detailed study of Agent Orange in the Vietnamese countryside was made about 6 years ago of the valley and surrounding mountains. After taking samples from many locations, the study concluded that most of the dioxin has been eliminated from the countryside, but that the three bases in the bottom of the valley are still quite contaminated from repeated spraying in the concertina wire to control weeds in the approaches to the base. A So existed for three years, and is the most contaminated; the other two existed for two and one years, and therefore have much less contamination.  Thus, A So has been declared one of the 28 known hotspots, and the 25 families that lived on the former base have been moved off, and fencing and thorn bushes planted to keep people away from the dioxin until a more permanent solution can be found.

All this is by way of introducing our activities for the day we spent in A Luoi. After the requisite meeting with local officials of the A Luoi People’s Committee, we visited three families, each with completely disabled young adults, whose parents had been exposed during the war. Two were from the A Oi minority group and one was Vietnamese. In all cases the father had fought along the HCM Trail in this area and had been sprayed repeatedly. The children are all in their mid-twenties. 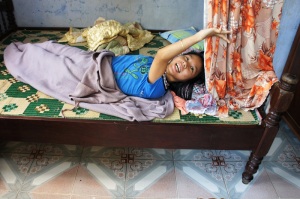 One woman takes care of her 26-year-old daughter, and cannot leave the house. The father died of cancer 8 years ago, and there is no one to relieve her. She lives on a government stipend of 800,000 VN Dong ($40) each month, and out of the small garden she grows outside her two-room house built for her by a foreign NGO. The other two are relatively well off; one family lives on a military retirement while the wife works, and the other family has both parents still able to work, but they lock the girl up in the house during the day while they are both away. All three children could benefit from day care, physical therapy to keep their limbs supple, and perhaps train them to feed themselves, etc. And certainly the parents could use assistance with care of these invalided children, which will be even more important as the age. Many parents are already in their 70’s, and will not be able to care for their children for many more years.

So, this was a heavy day. Then we drove across the mountains to Da Nang. I don’t suppose you want to hear about the van breaking down (twice) in the middle of nowhere due to overheating on the steep mountain roads carrying a pile of fat Americans, or about the flat tire, right? I didn’t think so. It was all good, though. We got a chance to walk around in the jungle a little while the engine cooled. It is beautiful, but every bit as forbidding as I remember it back in the Day.