Hue, VietNam, April 5th, 2014, Duc Son Orphanage
‎The Kids run out the to entrance and we greet each other  with giggles, laughter, high-fives knuckle-taps and “hello”. One kid entertains us with his expertise in keeping the shuttlecock in the air, using only his foot. Several of us try it, creating howling laughter from the kids. After our introductions, an administrative nun invites us to tea and a discussion regarding the Orphan Family. During the discussion, several smiling nuns pass through the room as if they are working, but we know they just want to check out our delegation. And they know we know it. So after the first few nuns pass through, we start waving to each other. 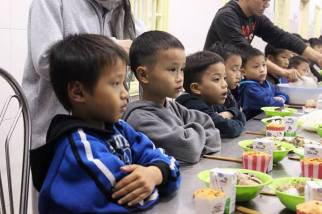 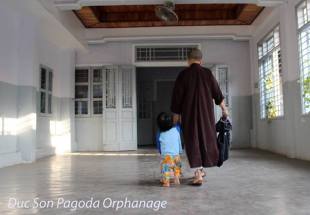 After tea, we break out into different parts of the home to hang with the kids. One member of our delegation decides to improve international relationships by teaching a group of girls the PattyCake game – clap-clap, slap-slap your friend’s hands straight across. Clap-clap, slap-slap hands crossing over. Hands move faster and hands miss each other. Keep trying and they’ll learn. We stop. The girls turn to each other and start slapping in perfect rhythm. Faster, slower, faster. Hands turn so that they are slapping the back of each others hands. Now, they know they’ve got us mesmerized and roll into an intricate hand-slapping routine worthy of an Olympic Gold Medal. We’ve been conned. Another con is when one of us, begins the High-Five routine and the kid begins to respond but at the last second, withdraws her hand and scratches her head.

One trick they truly didn’t know was the finger in the mouth, pushed into the cheek and quickly removed, creating a popping sound. They were wide-eyed with that one. Payback time! So, for the next five minutes, a group of kids walked around the large room, fingers in their mouths, trying to create the pop. Bright eyes and big smiles when they got it. Finally, an improvement in international relationships.

The kids knew songs in English. All of us sang “The ABC Song“, “Old McDonald“, “Auld Lang Syne” and an emotional ” You Are My Sunshine“… Soon after, we said our “See Ya Later” and returned to the bus. They are an inspiring Family.

A Luoi, Viet Nam, April 4th, 2014   Cattle Raising Project.
Professor Ba of Hue University and Mr Khanh Truong of Hearts for Hue, brief the VFP Delegation at the home of a Cattle Raising Project recipient. We had a delightful and informative visit with the family, program advisors, community officials and, of course, the Veterans For Peace Cow.

Hearts For Hue_ Cattle raising “Orange Cows Project” in A Luoi sponsored by the Veterans For Peace, Chapter 160 in Viet Nam.