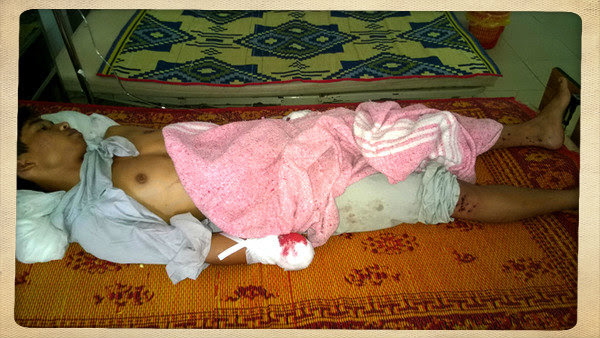 Injuries to Lay’s right hand were so severe that doctors had to amputate it. Lay’s other hand was shattered by the blast. Photo by Project RENEW.

Coffee drinkers love Vietnam’s Arabica coffee grown at Khe Sanh, a former battleground in the central province of Quang Tri. But they probably don’t know that to grow one of the best coffee beans in Vietnam, indigenous farmers face a deadly legacy of unexploded ordnance (UXO) even though the fighting ended nearly 40 years ago. Yesterday that legacy kept on giving.

In a coffee field near the Ta Con Airstrip, which is the Vietnamese name for the U.S. military’s Khe Sanh Combat Base, a loud explosion seriously injured a young Van Kieu man around 3:00 p.m. on Monday. Ho Lay was working with his brother digging holes in the ground, preparing to plant their new coffee crop. The 21-year-old man unearthed a piece of ordnance. He picked it up and shouted to his older brother, Ho Van Linh, who was working a short distance away.

“I heard my brother shout my name, asking me what it was,” said Linh. “I saw him start to throw the object toward me, just as it went off in his hand.” Linh said he thought the explosive device was an M79, also known as a 40mm grenade. Together with cluster bombs, those items have been the leading cause of deaths and injuries in Quang Tri Province since 1975.

Linh and other members of his family used a motorbike to bring Lay to Huong Hoa District Hospital. After he was stabilized, Lay was transferred to Quang Tri General Hospital in Dong Ha City for specialized treatment.

With nearly 5,000 hectares of coffee now being grown in Huong Hoa, the district produces 97% of the total coffee output in Quang Tri Province. According to the U.S. Dept. of Agriculture’s (USDA) Vietnam Coffee Annual 2013, Quang Tri ranks number eight among Vietnam’s coffee producing provinces, with large areas of coffee under cultivation.

For many indigenous families who have long scratched out a bare living with slash-and-burn agriculture, coffee has been the key to rising out of poverty. Farmers who started many years ago now earn good incomes, and some are prospering. Many others, such as Linh’s family, want to follow suit despite fluctuations in the coffee market.

“My uncle used to grow coffee on this land many years ago, but he failed,” Linh said. “Now we’re willing to take a chance again, knowing that the price of young coffee plants has never been so cheap. We have grown corn and peas,” he added, “but these crops are very short-term. Coffee is long-term, and produces better income for us.”

Linh and his brother, who graduated from high school in Khe Sanh two years ago, were planning to plant 800 young coffee plants in time for the rains which come to Khe Sanh in the next two months. However, their effort to climb out of poverty was shattered yesterday by an item of UXO, and his brother Lay will now have to live with a disability that will be with him forever.

Despite a global coffee slump, Khe Sanh is a booming coffee town, and the areas producing coffee are getting bigger. Providing coffee farmers with knowledge about UXO and safety guidance that covers all their work activities is essential where most of the land has yet to be cleared of explosive ordnance. The people of Khe Sanh, who have suffered poverty and many other disadvantages, want to improve their circumstances and assert themselves as full citizens, earning good livelihoods. To do this, they must be given the knowledge and tools to stay safe, and to report UXO when they find it.

Lay’s brother Linh, like other coffee growers, had general knowledge of the type of UXO that injured Lay. Linh guessed it was an M79. However, the two brothers had never been exposed to rigorous Risk Education, to teach them exactly what steps to take to be safe and how to report the finding so a qualified EOD team can come and safely dispose of dangerous items.

During the past five years, at least six coffee farmers have been injured by UXO in Huong Tan Commune alone. In the same village of Tram, an explosion in February 2010 wounded four young men while they were weeding at a coffee plantation. In October 2012 a 17-year-old boy lost his leg while planting coffee in in Ruong Village.