Visiting Kabul is unsettling. Reuters recently reported  that as many as 700 heavily armed Taliban insurgents were battling Afghan security forces in Logar, a key province very close to Kabul. Local officials said it is a test of the Afghan military’s strength as foreign forces pull out of the country. Reuters: Hundreds of Taliban Fighters Battle Afghan Forces Near Kabul – Officials… Ahmad Sultan, Tue Aug 19, 2014

Families of several Afghan Peace Volunteers (APV) live in Wardak, Paktia, and Ghazni, which immediately surround Logar. Some have already lost family members, and it is too dangerous for them to return to visit the ones that remain. One had family coming to Kabul for a long awaited visit and it had to be cancelled because of the escalation; another said he has only seen relatives a couple of times in the past several years.

Voices for Creative Nonviolence (VCNV) postponed cancelled a volunteer trip there in early summer due to insecurity violence surrounding the much disputed Afghan elections. Kathy Kelly and I were the first to return with VCNV. The escalating violence both in Kabul and in the provinces is well documented in an August 18th article Last Tango In Kabul in Rolling Stone, by respected American local reporter, Matthieu Aikins, (The 2014 Medill Medal for Courage in Journalism).

However, one of the APV’s 18 year old Zekerullah, has always lived in an atmosphere of fear, and his is a story of courage, strength and nonviolent resistance that deeply inspired me. Hakim first saw him when he was in the Bamiyan bazaar selling cigarettes and pens that he carried in a platform around his neck.

When Zekerullah was young and going to school, he would work half the day, sometimes fetching fuel from great distances with a donkey, and sometimes doing construction work. In the evenings, he’d be completely exhausted, but if he missed doing his homework, his teacher would use a wooden stick to hit the back of his hand with ten strokes, increasing the punishment by ten each day. As a child, Zekerullah was afraid from the moment he stepped into the school until he left, wondering how many beatings he would face that day. 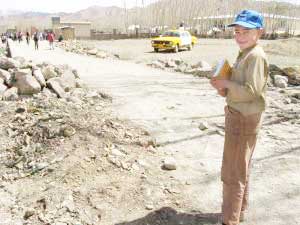 Zekerullah going to school in Bamiyan 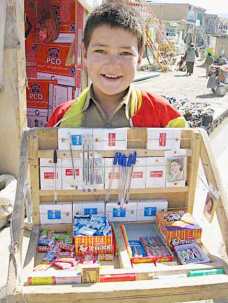 He was hit ten, then twenty, then thirty, then forty, then fifty, then sixty times in one day by his teacher! On the day when it would have been seventy, he ran away from school and did not return until this last year when he entered seventh eighth grade at the age of 17.  He has learned much in the intervening years, and now returns to graduate. He excels. In his current school, however, the practice of beating students who have not completed homework, or do not have answers in class, still continues, as it did in Bamiyan. 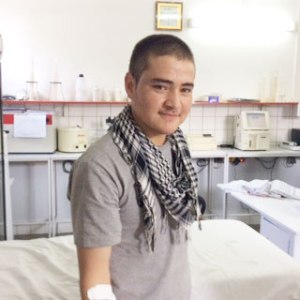 Zekerullah is no longer afraid, and has a remarkable commitment to nonviolence. Recently, 12 of Zekerullah’s classmates, who had not completed homework, were told to go to the front of the room, and line up for their beating. Unsolicited, Zek, who had done the work, joined them. When the teacher moved down the row with his stick, administering the punishment, Zekerullah asked the teacher to give him all the blows that were intended for the remaining 7 students who were standing in the row after him. The startled teacher, who knew Zek had the answers, questioned why. Zekerullah’s spoke about his deep belief, from personal experience, that students do not learn by beatings, and that he was four years behind in his education because he had been beaten.

Teachers in Afghanistan are not used to nonviolent resistance and, angry at being challenged, this teacher forcefully administered ten blows. When it happened again, fewer students were called to the front, but Zekerullah joined them, repeating his belief in nonviolence. This time the teacher went to the principal to get a cane, to administer even more painful blows.

A third time, no students were called to the front, but the teacher failed Zekerullah, who knows much more than the assigned material, on the midterm exam. Undaunted, Zek’s resistaence continues, and the other students are witnessing an incredible lesson in nonviolence.

From Afghanistan, Love Can Open Every Border   youtu.be/DD0Jqug7Mvo

Zekerullah, a Hazara, has learned this practice at the Borderfree  Community Center of Nonviolence. He doesn’t know of any other group in Afghanistan where Tajiks, Hazaras and Pashtoons are living together. He’d grown up thinking Tajiks and Pashtoons conspired to massacre the Hazaras. He hated and feared them, and it was unthinkable to mix with them. It was even more unimaginable to mix with foreigners—infidels—non-believers.  Now he knows all of these as friends.

Another big change for him, since joining the Community, is that he hadn’t ever understood what real peace is. He doesn’t recall it being mentioned in Afghan government schools, and conversation in Bamiyan where he grew up centered around war, and who was killed. Because of this experience he asked to send a message to young US students who might be thinking about enlisting in the military:  “Don’t do it. Don’t even join the police.  We have seen what militarism does. Wars have only one result: death. Don’t join.”

His story demonstrates the high value Zekerullah places on education, and he believes it is the most important priority for the Borderfree Center. Many Afghan children don’t have the opportunity to become literate, and develop to their full potential. He understands, though, from his hard work on the streets, that children must be fed adequately in order to learn. He has taken that insight and become a leader in the Street Kids program, where impoverished children, who regularly attend classes in reading, Dari (their language) and math, receive monthly allocations of cooking oil and rice for their families. I was delighted to see their enthusiasm in these classes at the center, and their hunger for learning.

Zekerullah shared his two key sources of motivation. He believes Afghans need to be taking action, doing something, and surmounting their fears. Internationals, once infidels, now friends, encourage him and the team, and strengthen his conviction. However, I have personally never seen such an inspiring example of nonviolent resistance, and Zekerullah has given me great hope for the possibility of a new Afghanistan!