Posted on September 18, 2014 by Veterans Speakers Alliance, Veterans For Peace 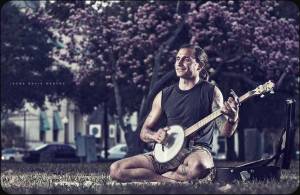 Jacob George, a 3-tour Afghanistan War Veteran and IVAW member from Arkansas took his own life yesterday. He was an incredibly warm person, a gifted troubadour and banjo player, and as he described himself, a ‘storytelling hillbilly’.

My strongest memories of Jacob are when I met him the first time here in SF when he was visiting VFP sharing his experience of visiting Afghanistan as a civilian, when we and so many others marched in Chicago at the NATO protest before we threw back our medals (and he saved the day being one of the few musically and cadence-inclined people in our marching block), and when local vets Graham, Max, and I saw him perform songs from his heartbreaking album, A Soldier’s Heart last summer. He was one of those amazing humans that affects everybody around him for the better. His gentle demeanor spoke nothing of his inner torment. He was a true peaceful warrior.

​Jacob throwing his medals back, NATO Chicago, May 2012

I’ll leave you with his song that says everything: “Soldier’s Heart.”