Today we picked olives in Burin, a short “service” ride south of Nablus. We have picked in the area quite a lot because illegal settlements (Bracha and Yitzar) have been established on the hills on both sides of the valley and the only road from one of them comes right into Burin. The couple we picked with today was quite young, were nice and, took good care of their olive orchard. 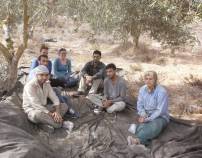 Taking care of orchards is hard. The harvesting time is not set by the ripeness of the olives, it is determined by the time window the Israeli military sets for harvesting. After an illegal settlement is established the occupation force sets up a buffer area around it in which farmers are not allowed in their fields without a permit from the Israeli military. During harvest there is s general permit, but to prune the orchard requires a special permit, as does being in the till (all the orchards are tilled every year) and, to fertilize the orchard. 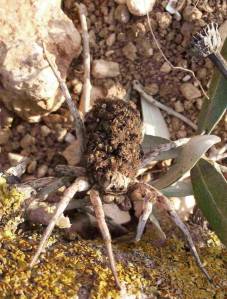 This couple did a lot of pruning during picking. I am not sure if this the right time to prune, but that may be how they get it done – prune during the harvest permit time. While picking we found a large wolf spider, 2-3 inches, her back was covered with all of her young. At first, before close inspection, it looked like hair on her back. There was also a large green caterpillar, probably one of the Saturniidae, over 3 inches long.