Posted on August 7, 2016 by Veterans Speakers Alliance, Veterans For Peace 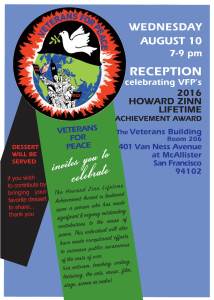 The Howard Zinn lifetime achievement Award is bestowed to a person who has mad significant & onging outstanding contributions to the cause of peace. This individual also has made exceptional efforts to increase public swareness of the cost of war (via activism, teaching, writing, lecturing, the arts, music, film, stage, screen or radio.

VFP member Pat Scanlon sings “Extremist” Pat served as the coordinator of the “Smedley Butler Brigade” Boston VFP Chapter. He was featured in the “Daily Kos” as a rebel songwriter.