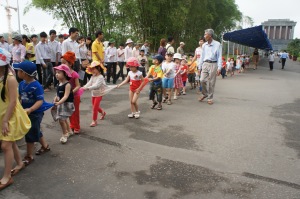 April 19: Thursday:  On what will probably be our busiest day of the tour, we had SEVEN appointments:  Started with a visit to Ho Chi Minh’s mausoleum in the National Center.  We went through a security and sign language lessons in comportment by stern young soldiers dressed in white uniforms: take off your hat, no talking, no sunglasses, line up, wait here, go there. As we entered the ice-cold mausoleum, we climbed a set of stairs to the second floor, and looped around a dry moat with four guards standing in it around Ho lying on an elevated and tilted platform. We walked without stopping around three sides of the platform and out; and altogether odd experience. As he considered the future, an aging Ho instructed that he was not to be given the Lenin treatment  — embalmed and put on display. But the Politburo had other plans for his remains. I guess in their view the country needed an idol; a mere Founding Father would not do.

Then we visited the headquarters of the Vietnam War Veterans Association (VWVA), where we met with the chair, retired General Tran Hanh, who was a MIG 17 pilot during the American war.  VWVA is the equivalent of the VFW was in the US after WWII.  Two point six million members and thoroughly integrated in the Party and the government (with 50,000 in the Party alone)–yet another formal meeting…

Then a tour of the Temple of Literature where our very great guide, Truc, gave us a lecture on Confucianism that was astounding both for the level of his self-taught English, and for the depth of his understanding of religion, philosophy, and class.

Then on to the US-Vietnam Friendship Village (USVFV), founded by US Vet George Mizo, and supported by VWVA.  The USVFV provides medical care for about 30 injured Veterans of the war for 2 months each of concentrated medical care, and provides vocational training for about 60 handicapped Agent-Orange affected children. This is the Cadillac of AO facilities; it was the first of its kind, and has been very successful in attracting funds from several countries and organizations.  The grounds and buildings are very nice. The Village used to be far out of town, but Hanoi has now reached it and beyond — and the number of paddies are in the neighborhood is rapidly shrinking.

Then on to meeting with the leadership of the Vietnam Association of Victims of Agent Orange/dioxin (VAVA), and my old friends, Nguyen Van Rinh and Nguyen Minh Y. They welcomed us into their new, comfortable-but-not-ostentatious headquarters and informed us of VAVA’s activities in the last 8 years. They started with 10 members in 2004 to develop the lawsuit against Dow and Monsanto, and have morphed into a national organization that speaks loudly for the victims of AO, and has 300,000 members. Rinh retired as a 3-star general from the Army a few years ago.  He had been a company commander at Khe Sanh, among other exploits.

Then back to Hanoi for a formal dinner hosted by General Rinh (and pointedly paid for out of his own pocket, not VAVA funds).  A beautiful young woman in an ao dai poured Spanish wine, and we toasted to friendship, peace, reconciliation, and our lost comrades.  Staggered home and slept like babies.

We stayed in old town of Hanoi during our stay at the Diamond Hotel, one of what must be at least two hundred in the area that are small, friendly, and reasonably modern. Very beautiful in an uber-urban way. Warrens of stores, with a tendency to cluster certain types of merchandise–one street sells toys, another sells motorcycle helmets, another has sheet metal shops, etc. It is an incredibly busy place and somewhat noisy place with even construction occurring all hours of the day and night.  Traffic is an amazing tangle, with an increase in both traffic lights in the last few years, and in people who bother to pay attention to them. Still people will turn left at a corner right into oncoming traffic and only gradually bother to work their way into the right-hand lane. Ear plugs are recommended, but I drank the water without incident.

On to Hue in the morning.